At noon, the snow gave way to rain.

There’s a special sadness to rain that washes out snow. It’s something like a falling out. These things are brothers. In a little while, they’ll both be gone.

I didn’t take a walk today. I got my clothes washed, coat fluffed, shoes dried, then the rain started. I think that’s okay. I’ve seen snow before. I’ve been through this before. Instead, I made tea and then some coffee and watched the unraveling whiteness from the kitchen window. I read ‘Cherry.’ I’m trying to finish that book. I’m trying to finish anything.

I’ve been having nightmares about teaching again. I often have nightmares, but it’s been awhile for this specific variety. Maybe the stint at the middle school writing club brought them back. I’m standing in the hall with all the lights off. There’s a storm outside. The classrooms are empty. In some of the classrooms are school supplies – books, backpacks, coats and phones – so I know students used to be here. They’re chased off. They’re not coming back. And somehow that feels like my responsibility.

Another year closes. What did we learn? Things seem dire. It’s hard to tell how dire they really are. We have a habit of fixing on the negative. There’s a human resilience, but it’s often tested, and I don’t know that any of us are ready to be tested again.

A month ago, a 13yr-old girl was abducted and murdered in Lumberton, NC. Her funeral is coming up. Her father is Guatemalan and lives and works in the country. The US just denied his Visa to return for her funeral.

What is my responsibility? I write some things and some of them matter. Is there something more? I’ve been thinking about teaching. The thought of teaching paralyzes me. I don’t think I made much of a difference in my students’ lives the last time. A lot of them had hard lives. Some of them didn’t have homes to go to. Meanwhile, I talked a lot about the water cycle.

But that’s the trick: you only have the time to do one specific something for the world. You can’t do anything more. It’s terrifying to think that ‘something’ might not be enough. Or rather, it’s terrifying to know that it can’t be. But you still have to pick it and I guess that’s what I’m trying to do.

Melancholy were the sounds on a winter’s night.

I read a lot about stocks and bull markets today. Some analysts think we’re running headstrong into another recession, others don’t. Either way, all the uncertainty is shaking the numbers. The Dow dropped sharp yesterday. Still, it’s been a year of record highs.

I read a lot about Hurricane Michael today. The Florida Panhandle looks like a drunk’s order at Waffle House – smothered and chunked. But they’ll rebuild. There was a long period of dilapidation after Rome got sacked fifteen hundred years ago then you wait awhile and along comes the Renaissance.

A razor breeze this morning, should have worn a coat. In the cold car I couldn’t help but take stock of the year: I lost a job, got another; I lost a car, got another; I lost a love, got…well, that’s complicated, but you get the picture. Point is, it should all sound like something hopeful: we recover. But then I kept on thinking and I remembered the old job, the old car, the day I asked her for everything under a perfect March moon. What is resilience, anyway?

I knew a guy who lost his job to the recession. He was oldish, 60’s, had been a manager at K-Mart for thirty years. Poof! said the market and that was it. I worked with him part-time in a retail stockroom. We folded clothes. He went home every day to a son he had late. I met his son once at a Moe’s. We shook hands. The guy was a proud father, but every time you looked at him there was a thirty-year hole in his gut.

That’s all to say: loss is real.

Good luck to Florida. Good luck to us all when the pearly-white avarice catches up. You’ll get better, most of you, but don’t feel ashamed to sneak a cigarette at 5am on the balcony every once in a while, charring up your insides, dipping ash like spackle as you build the unbuildable back up.

“I want to be two people at once. One runs away.” – Peter Heller, The Dog Stars 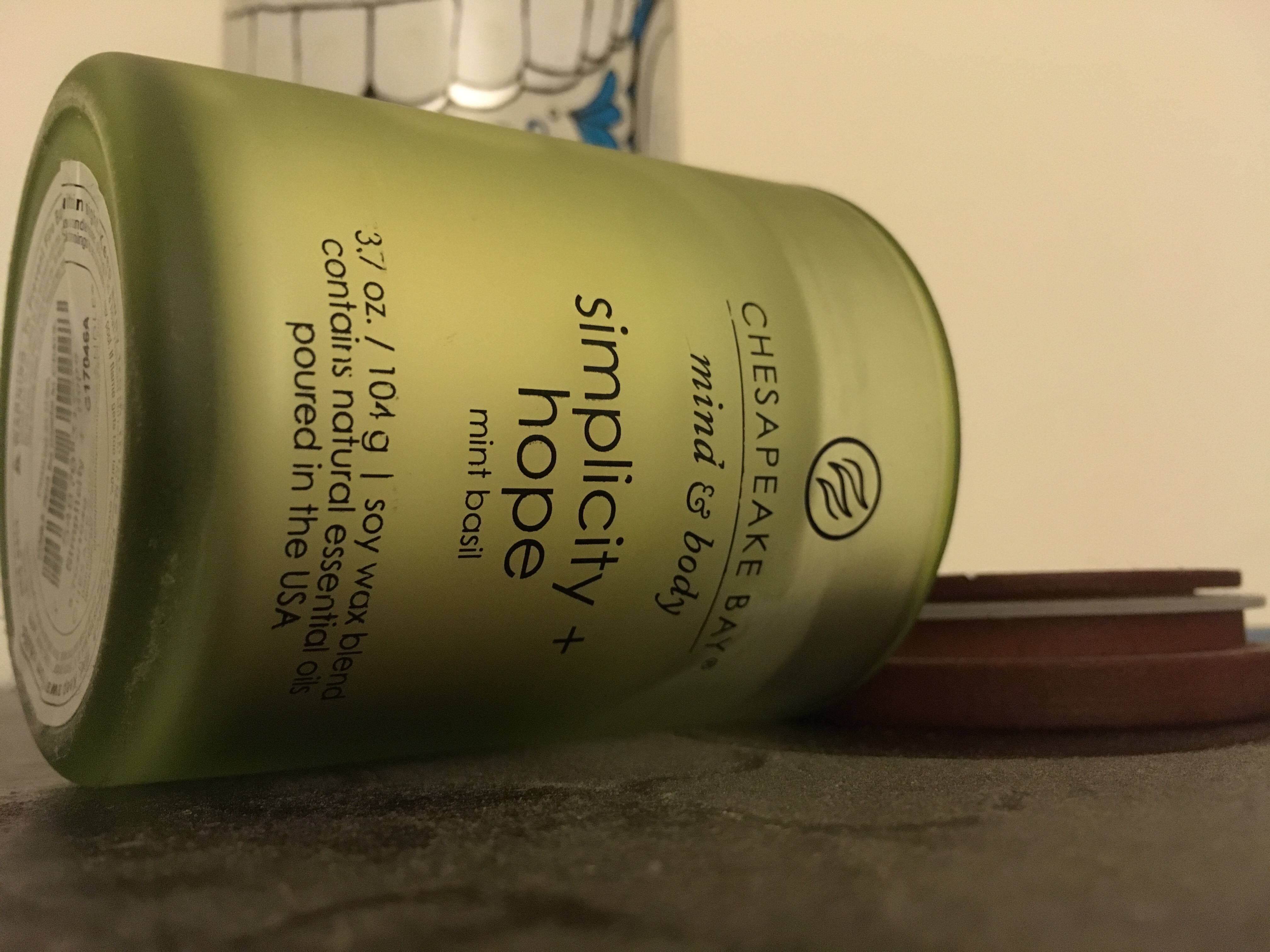 I can hardly keep up anymore. Each day is a different story, different spin. Last week’s crises are Alexander crossing the Euphrates; this morning was the Civil War. Part of it’s attention, part of it’s the internet – things go a lot quicker when it takes two seconds to send a message around the world.

The powers that be are clued in: Giuliani tells Mueller to ‘hurry up.’ Obama won’t mention Ocasio-Cortez in his endorsements. Old men of power want you to forget that change can happen, that real change takes time; instead, they want popcorn press conferences and Chinese-made American flags.

Language is power, but language is also dangerous. In Rome, they’d nail your hands to a cross and cut you open for preaching a single book; that went on for hundreds of years. Now, it’s tweet tweet post post caption this that picture, narrate the video where your black lover’s murdered by a white cop, hashtag twenty-seven years of men’s hands on your ass. It’s vital, succulent, burst open like ripe tomatoes, easily washed down the drain like so much juice.

It’s hard to pay attention when everyone’s got an important story. It’s easy for power to change a word, a phrase, delete this and that and make us miss the important parts. We need our holy book. We need a thick bound compendium worth being crucified for. Each page a sex, creed, color, representation. All our spit-blood memoirs wave-wave on the internet and pass us by. We need something stable and shared.

“Hold down through these troubled times, be another victim to my stubborn pride 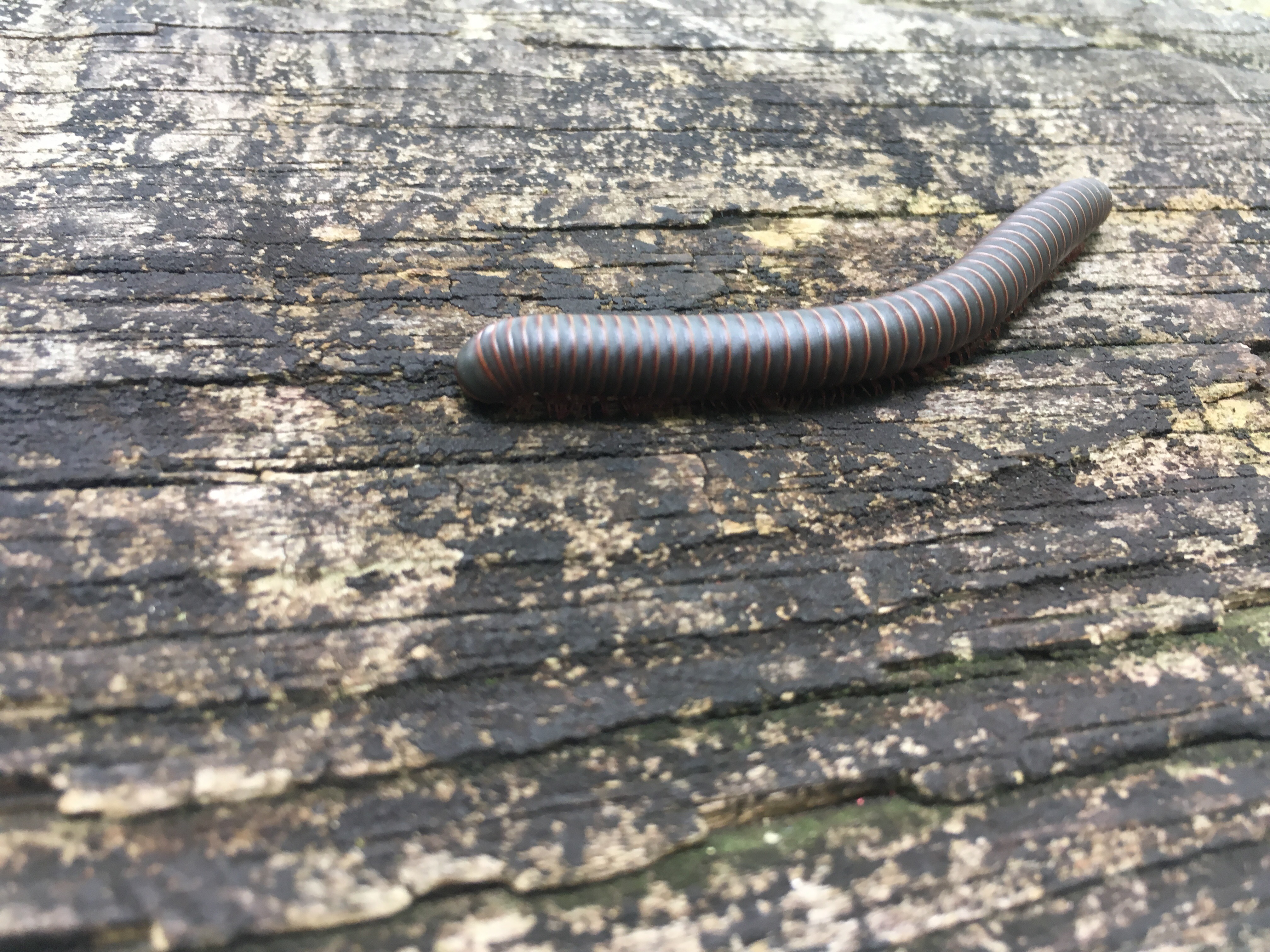 I went to see the Wirligigs in Wilson. For those that don’t know, Vollis Simpson – a Wilson County native – spent his retirement creating massive metal whippets and doodads, colorful, wind-catching, made to sparkle and spin. He was a farmer by birth, soldier by necessity, and mechanic by trade. Before his death, people were buying his whirligigs and sticking them in art museums.

The park was flat ground with an amphitheater, not all that big. The Whirligigs sat around like old dogs surviving summer. Though it was cloudy, there wasn’t much wind and not much was spinning. I walked one full circle of the park, passing three old couples and two women holding hands. It was ghost-quiet. Around us, old brick buildings squatted in differing states of disrepair.

I left the park. I drove through the city, I wanted to see the place that inspired Simpson’s work. I saw a lot of dilapidated houses and chipped paint. There was a big bright BB&T building, but even it looked worn. A wooden train station was packed with people who didn’t have the time to think about appearances, slumped on old benches, struggling to find shade in the holey awning. Across the tracks, police courted a black neighborhood.

Wilson is the unspoken truth of America. She’s put the prom dress down, wiped the make-up away, closed the door on media suitors. She’s not the pastoral daisy of the Right or the verdant commune of the Left. She’s not a hard-working town, a bustling city, the techy suburbs. She’s a place that had it’s prime fifty years ago, one perfect dance under the starlight. Now it’s morning.

There was art everywhere in the City. Black murals on black churches; a series of photographs that caught glints of Civil Rights. According to the census, Wilson is an almost even split white and black. Driving around, all the white faces popped up around the suburbs, the city-center was all black. There were newer buildings in the suburbs, better roads, but it’s one claim to culture was the catch-all of a bloated Wal-Mart. In that way, Wilson is also America: white men and women cling to money whispering into it a faded, fifty-year dream; meanwhile, minorities wrestle with the deck stacked against them after all this time. We voted well in the 60’s, but no-one’s ever learned how to talk to each other. A fractured past, two trauma’s separated by train-tracks, forgotten in a world that sold it’s shipping overseas.

Simpson’s sculptures didn’t do much for me when I was standing under them, but they made more sense after my drive through the city. They were brilliant, vibrant, but sterile. Some moved limply, others simply wanted to move. As a young man, Simpson fought in WWII; he came home to watch the world change. In all substantial ways, America looks better – even in 2018 – than she had in the prime-time years of the 50’s. But the reckoning took a toll. Some of us – those lucky by birth, money, skin, whatever – live on the cutting edge future. The rest of America is Wilson – a beautiful post-depression, grappling with the grief of knowing what precious looks like but never knowing how to open her hands wide enough to hold it.

“I guess it’ll just rust and fall down when I’m gone.” – Vollis Simpson, interview in the New York Times from 2010 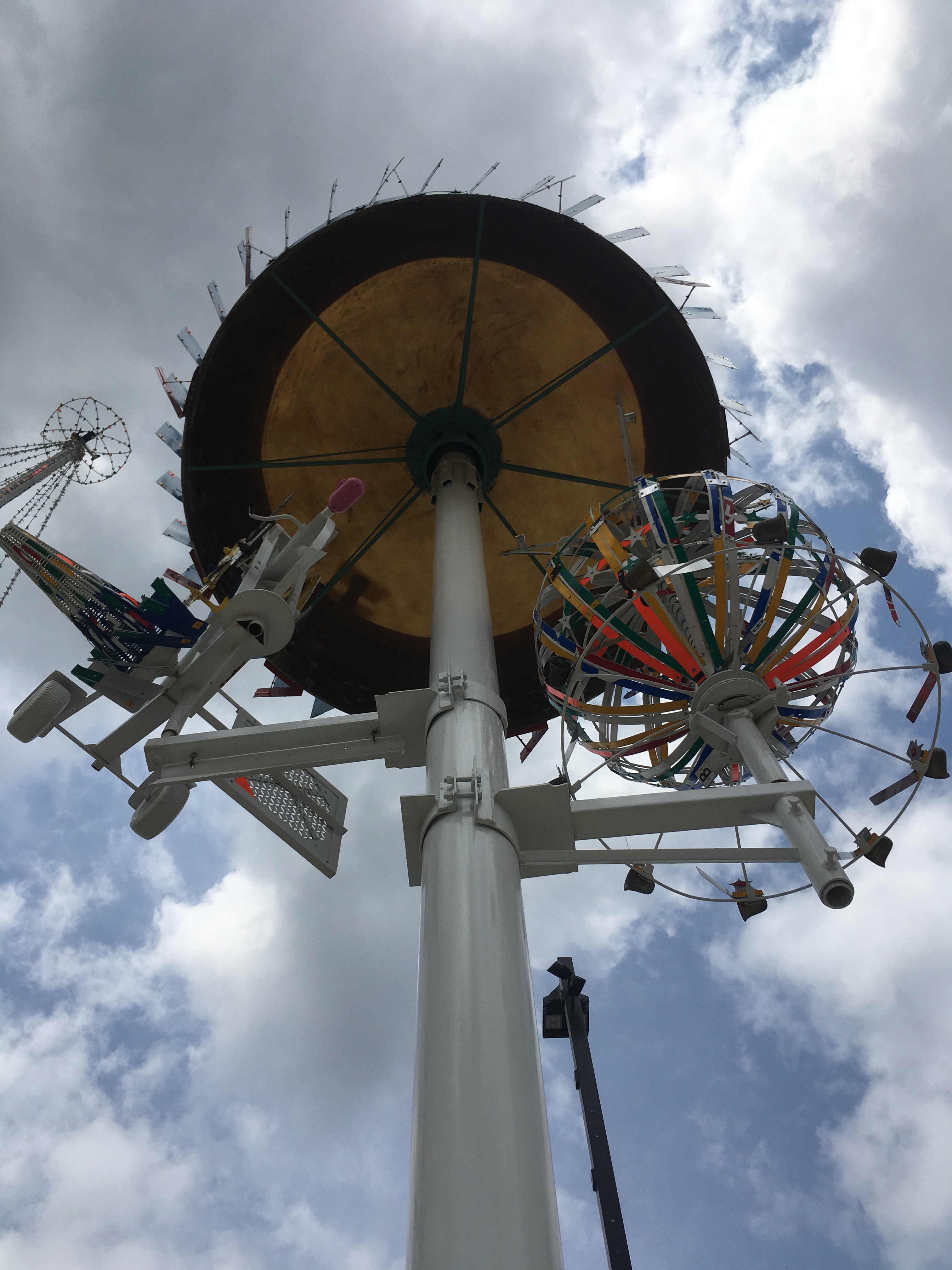 Kid comes in about 3:00pm, high school, blonde as tangerines, online banker looking this-that-way at the old branch walls. She stops at the slips. She picks up a pen and puts it back down.

She’s got a form, she shows her license, she’ll be a senior in August. The form’s so faded I’m guessing her printer used its last ink on fifth grade science projects. I squint. She squints.

“Notary?” she says, and that doesn’t help a whole lot because I’m looking at a crumpled, oily, palm-sweat slip of paper that’s talking about off-campus lunches.

We dig in a bit. I’ve got my elbows on the table, she’s got her fingers tapping our envelopes. Slow and calm, her story peels like skin-bark after too many days in the pool: turns out, her high school demands all off-campus lunch permission forms be notarized. Not okay’ed with your Homeroom. Not signed by parents. Notarized, officially. My supervisor leans over and says all the Wake schools do that. I’m blown away.

We get her taken care of then I’m laughing and crying for minutes. If you were locked in the vault you could still hear me.

I asked the girl one more question before she left for the stifling summer day: “What do you think about all the new security in schools?”

She said: “It doesn’t matter. If they want to shoot us, there’s lots of ways to get inside.”

“The desire for safety stands against every great and noble enterprise.” – Tacitus, Ancient Roman Historian 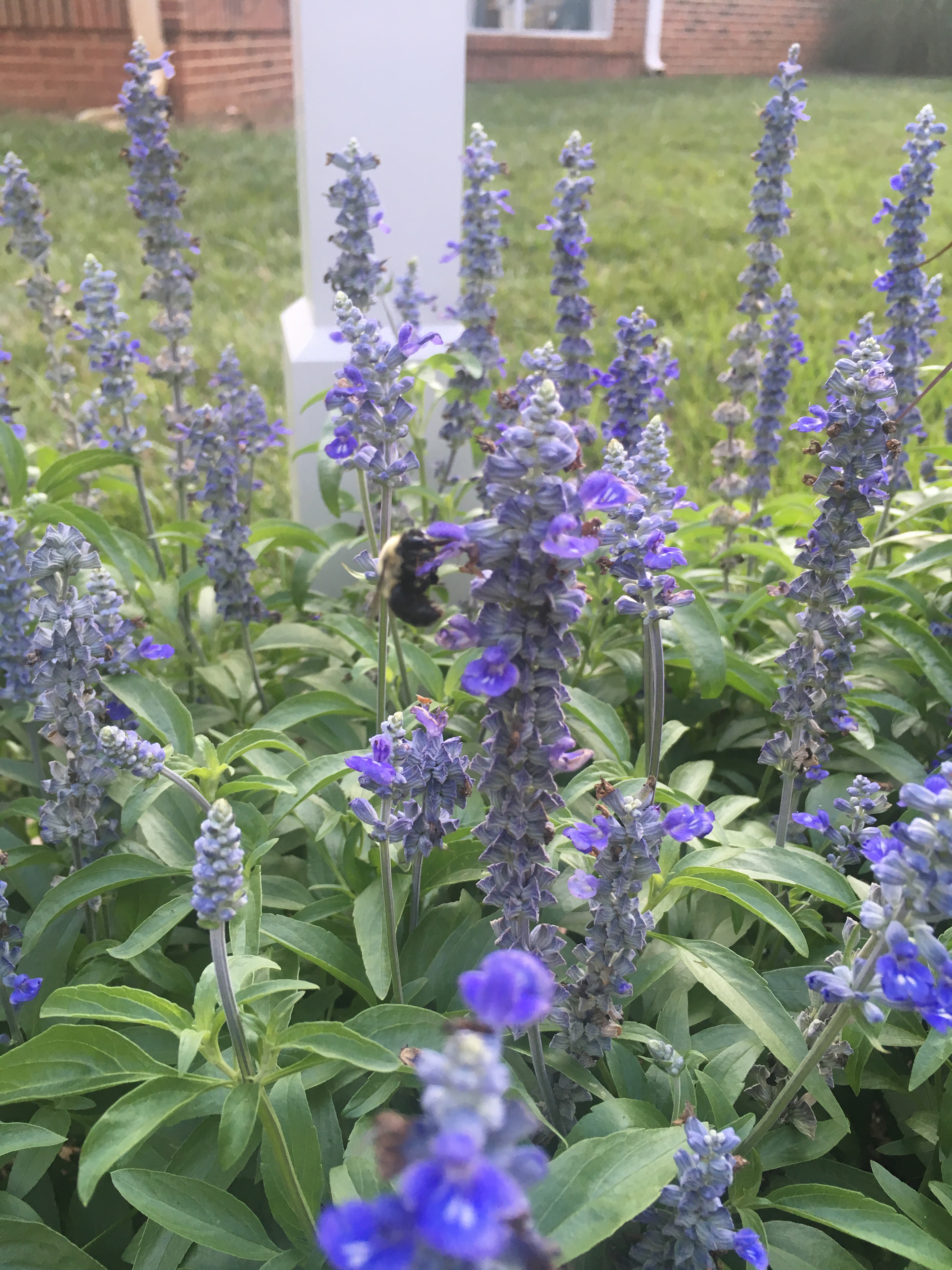