Everyone was out even though it was raining. The temperature had warmed up and wet roads looked like the beginning of something, the first lap of a race. I got my coffee from Caribou like I always do then went grocery shopping. The lady in check out was flustered, but said she’d had a nice Thanksgiving.

The weekend’s been Christmas shopping. Picking around in crowded stores, not finding what I wanted, searching more online. I like the dynamism of the holidays, the ‘I’ve-got-to-get-out-in-the-world’ sort of feel. I like the kind of celebration that shows we’re all dead-broke and dead-tired but obligating ourselves to do good for our loved ones anyway. It doesn’t matter if your gift’s a hit as long as you’re the one giving it. It doesn’t matter if next year is going to drain a bit more spirit out of you because you’ll get it all back giving something special away.

At a different store, a man with a big dog walked in and the cashier told me he’s the owner. She seemed bothered by him, on edge, and the dog noticed because it sniffed her and wagged its tongue and tail. That was his christmas present, a big wet nose, a bit of kindness when someone needed it.

Baffled and disgruntled, I fill my Woolworths trolley with dead turkey and lamb, and wonder when Love was lost, among the Christmas crowd.

Judy Croome, A Lamp at Midday

There was this woman I dated a while ago who I used to go to malls with. This was back when malls were still a foundational part of American culture, though even then you could see the signs that they were moving on.

But that didn’t matter to us. For me and her, malls were a personal thing. They were spaces we could be comfortable around each other. There were lots of spaces – including the apartment we shared – where that wasn’t true. Some people click with you when you’re alone and some people click with you when you’re in public. Me and her were public people. And for those few hours walking around, talking about this or that, living in a world of window-shopping and picked-up objects, I think we had a special love.

I went to Southpoint Mall in Durham, NC for the first time in forever. I’d been writing in the morning but my laptop cut itself off to update so I needed a place to be. It was a strange day, a patchy sky, sometimes cloudy and sometimes bursting with a New Year’s sun. There was ample parking. I found a space across from a couple church buses.

Inside, the place was reasonably busy. It still smelled like Christmas – pine trees and peppermint. I walked in and out of stores not really looking at anything, paying more attention to the people, and I saw a lot of store-workers looking drained at the end of a long season. But even that was lovely – fake, hard, unfair, but perfectly predictable, a call-out to a time when walking along a covered boulevard overspending all your credit cards was the pinnacle of living. In the end, I left without buying anything. I’d gotten what I came for.

I remember this one particular time at Southpoint towards the end of that relationship. It was night, we’d gone to dinner, we were walking about an hour before the stores were closing. I think it was summer. There’s a big ceiling light that spans the whole inside of the place. It’s covered in floodlights that change for the season. That night, the lights were undulating shades of blue. It looked like the ocean. Staring up at those lights, I felt like we were a part of something old, fluid, indecipherable. I held her hand and imagined we were on a beach somewhere. A far away place you couldn’t pinpoint. We stayed until close.

Today’s her birthday. Wherever you are, shopping or at home, I hope you have a full heart and restless, excited dreams.

The breach between the mind and body can’t be healed by more knowledge.

Barry Webster, The Lava in my Bones

When I think about Christmas, I think of a thrift store off Main. I’m pretty sure it isn’t there anymore. In fact, I’m pretty sure the store only lasted a few years, and I only went to it once or twice.

Anyway, it was on this side road in East Burlington that if you took long enough would either get you to the middle school or to Graham. It was in an old, hollowed out brick building that had fallen on hard times, it was lit like an ER, there were old black particle-board tables set in rows and cardboard boxes full of stuff obliterating the even lines. The owners were old ladies. So what I’m saying is, the thrift store was nothing unusual.

I went there with my Mom. I think it might have been after school, or maybe it was a weekend. Either way it was dark outside. We were Christmas shopping. Not for the family, rather the ancillary gifts you put a few dollars and two cents into in hopes of warming up the people you sort of know and would like to know better. We walked around for an hour and I got bored. There were tinsel wreaths. There were craft ceramics. I bought a tiny straw angel for a family I knew took angels seriously. Then we left.

But that whole store was Christmas to me: a dim, uncomplicated lull of gift-giving; the cheap earnest dressings; the streetlight evening through the windows; I think they were playing Christmas songs on a scratchy record player.

Anyway, that thrift store has been on my mind lately. I’m glad it was there. I wonder if anyone else remembers it?

Why they were loaded with bags of beans and peas and anything else they happened to pick up when they were still some distance away from the street where the first blind man and his wife lived, for that is where they are going, is a question that could only occur to someone who has never in his life suffered shortages.

Coffee: Bolivian Medium-Dark, Trader Joe’s Brand; I couldn’t remember if I’d ever had it and now that I’ve tried it I know that I had; it’s sweet on the first gulp, sour on the second, and by the end of the pot your insides are grumbling like two old men arguing about Nationalism.

I spent half an hour in a Target yesterday trying to find some face cream. We’re getting to winter, the dry cold breaks me out.

The Target was already packed for the holidays. One of the clerks told me they were having a 10% off giftcard sale, so maybe that’s why. It’s a big store, one of those they like to slap ‘super’ on the side of, but even so the aisles were jammed and frustrated families were snagging their carts together. In other words, nothing special for the season.

I’ll tell you a secret: I like those sorts of crowds. I like the sounds of it: all those voices stacked together like a layer cake. I like the nervous energy, the coy competition, the fervor around a bright yellow sticker with a price on it. I’m sure there’s a bucketfull of issues about consumerism and wage inequality stuck in there (some of which I’ve probably brought up on this very blog), but despite that, the holiday department store is the closest thing you get to a communal event in modern America and I’ll take what community I can get.

I found the face cream on an aisle I thought I’d already been down. It was hiding beside a few bottles of shampoo.

When I shop, the world gets better, and the world is better, but then it’s not, and I need to do it again.

The button came off a pair of my work pants. I think I can sew it but the pants are old and wearing and I’ve been meaning to get some new pairs so I went to the store. I had an ad in my email for BOGO at Express and the closest store was in Triangle Town Center so I went there. The mall’s a half hour through Raleigh. When I got there, they were doing renovations and the store was closed.

But the trip wasn’t for nothing. It was a cold day, cloudy, the kind of weather you want to break your heart to. There was a lot of traffic on the roads. I’m not used to going this way so the flighty voice of a map app guided me. She took me down Capital Boulevard. I saw many closed stores and open office parks. A newish high rise with no name and glass windows stared down a shuttered hotel. They’d been doing work on the hotel and stopped when the money ran out. The walls were chipped and the asphalt lot had big holes in it.

Triangle Town Center was much the same. Aeropostle was closed, Dillards was limping, Sears was a wasteland. Inside, many of the stores were stripped to lightbulbs and they were running big, silver, exposed ventilation around the bottom floor. Still, the mall was busy. People walked around on cell phones. Kids eyed cookies as big as their heads. It was alive but listless, broken like the gray day, a hymn to late 20th century capitalism, everyone working hard and poor to put themselves on the pages of the already half-written history books.

I didn’t buy anything. I drove home and ordered two pairs of dress pants online.

“Since the Leeburg Pike [at Tyson’s Corner] carries six to eight lanes of fast-moving traffic and the mall lacks an obvious pedestrian entrance, I decided to negotiate the street in my car rather than on foot. This is a problem planners call the ‘drive to lunch syndrome,’ typical of edge nodes where nothing is planned in advance and all the development takes place in isolated ‘pods’.” – Dolores Hayden, Building Suburbia: Green Fields and Urban Growth, 1820-2000

Coffee: House cup from Mex-AM, a Mexican joint in Graham, NC. The restaurant is in a brick building with high ceilings. It’s dark, musty, and serves eggs and pancakes for breakfast. The coffee tastes like a shift-worker’s smoke-break.

I drove 60 miles west, then 60 miles east, stopping once each way. The first stop was for lunch – I saw my father and my mother, they’re doing well. The second stop was at the Tanger Outlets. The mall was busy. Everyone was dressed to impress someone, mostly themselves. I joined the shoppers for a couple hours and left with a suit. Plastic bags. The stores smelled like perfume.

Years ago, I part-timed in Tanger at the Saks. I wore a tight black shirt and worked the stockroom. Once, on a lunch break, I sat outside and ate some trail mix. A bit got caught in my beard. A man in Army formal walked by and told me to clean myself up. I wanted to punch him, but I didn’t. He looked good. He was a with a girl. These days, I like being the butt of something – there’s power in getting noticed.

“If you’re losing your soul and you know it, then you’ve still got a soul to lose.” – Charles Bukowski 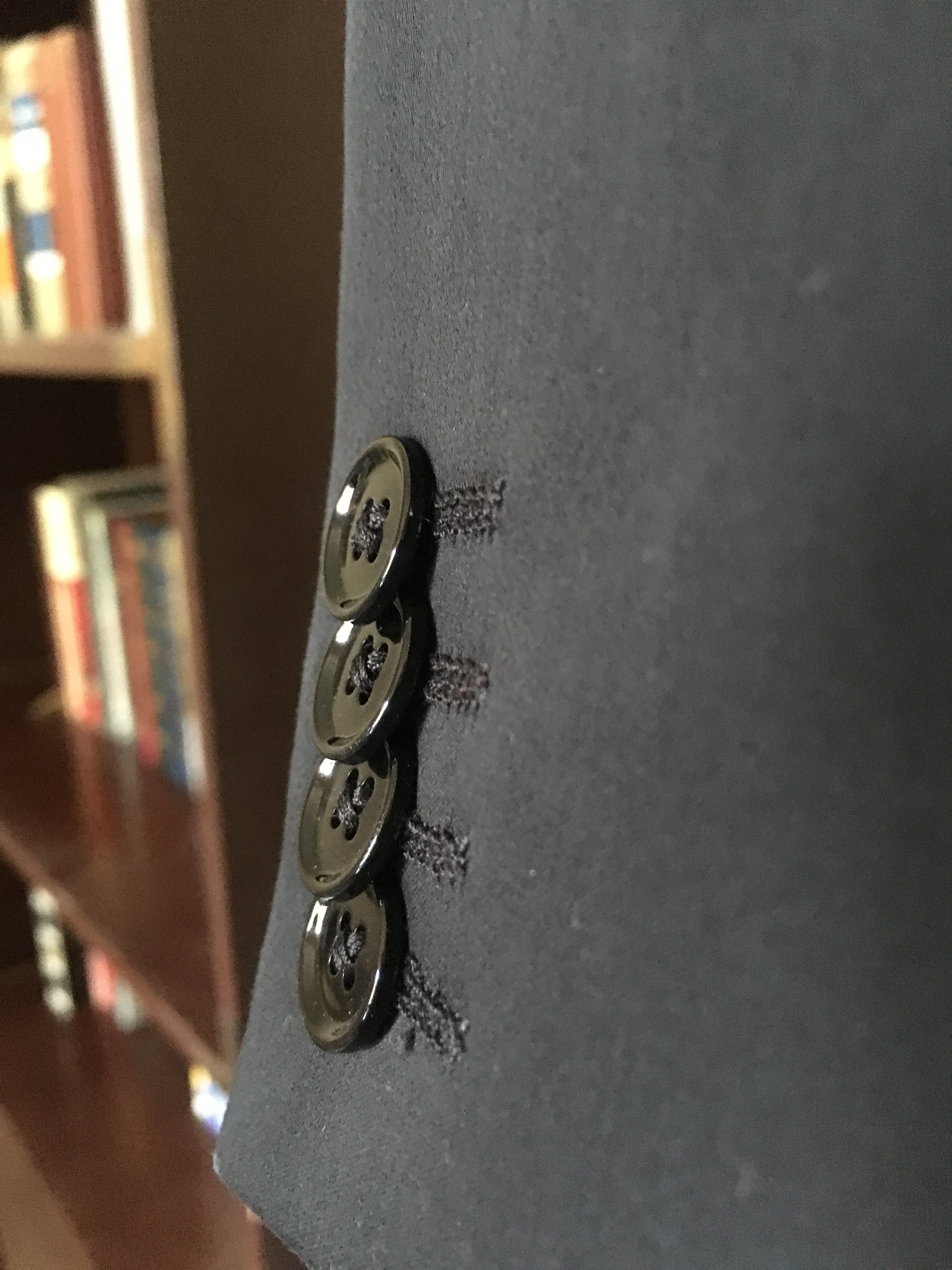